At the time of posting, I have reported 9 security issues to companies all of them being subdomain takeovers as this is what I am currently focusing on due to it being an easy vulnerability for me to find and exploit with the limited time available. One of these actually got me my first bounty, $500.

I won’t be sharing exactly how I found the subdomain takeover in this post, only the disclosure process. All I will say about it is that I have a server somewhere that I give a list of domains to and it verifies some stuff for me.

But before I continue, I would like to say what a subdomain takeover is if anyone reading this does not already know. A subdomain takeover is where a subdomain is pointed to a service but the subdomain is not claimed at that service and someone is able to take control. Let’s use Example Company as an example. They have used a cloud service (for this example, let’s call them CloudHosting) to host a website. CloudHosting requires a CNAME record for a custom domain. After a while, Example Company no longer needs the services of CloudHosting on the specific subdomain. So they remove the domain from the CloudHosting dashboard but forget to remove their DNS record. Someone then uses their CloudHosting account, adds the subdomain and they then have control over the subdomain which can lead to many issues such as phishing, malware distribution and in some cases, taking control of user accounts if session cookies are scoped to the apex domain (example.com instead of www.example.com). I hope that made sense.

I would also like to say that this is my first time publicly disclosing a security vulnerability so I apologise if this isn’t as good as other disclosure posts you’ve read.

After not being able to find a security email on their website, I decided to use their live chat to get contact details for their security team. These were the options available: 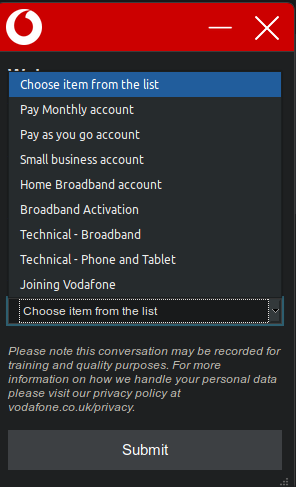 Nothing for security or even a general contact option… So I just chose a random one (I believe I chose Technical – Broadband). I was first given a phone number but after explaining that I live in South Africa and therefore I won’t be able to call, I was given an email address. 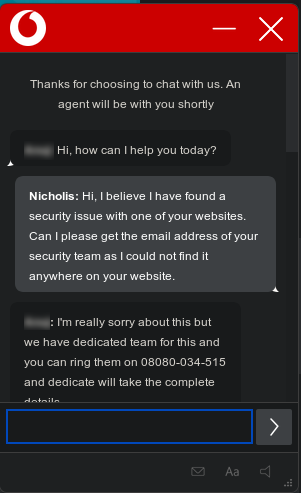 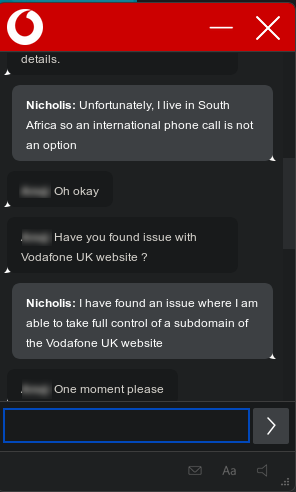 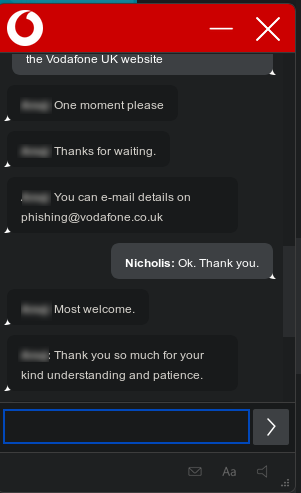 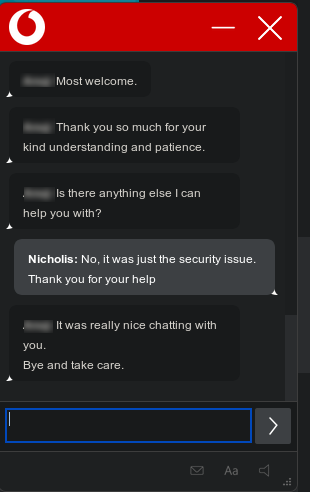 So after setting up a proof of concept on an Azure trial account, I sent them an email.

I obtained the certificate from Let’s Encrypt (I verified the subdomain using the HTTP method). 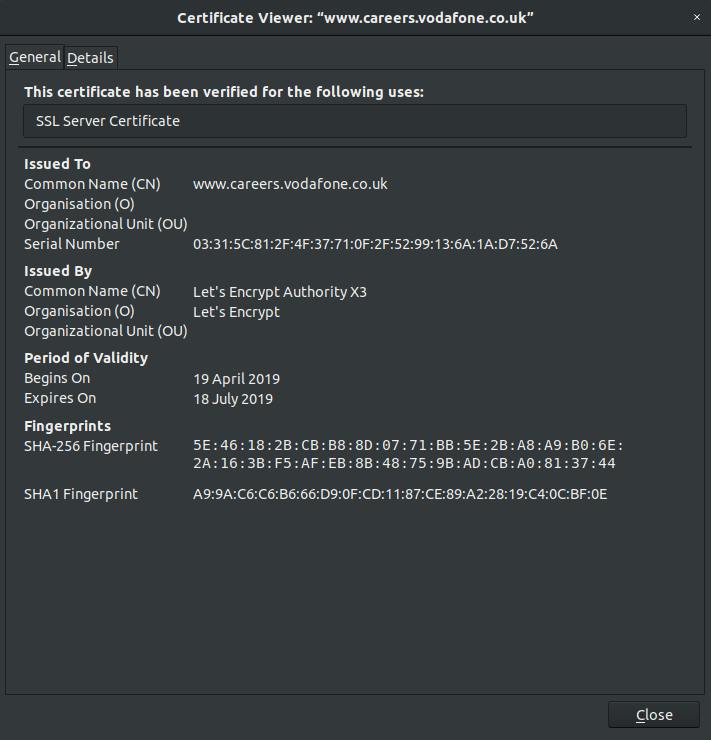 The PoC was set up on a URL that people would not know about and not on the index page.

For the PoC page, I went with my standard subdomain takeover notice. 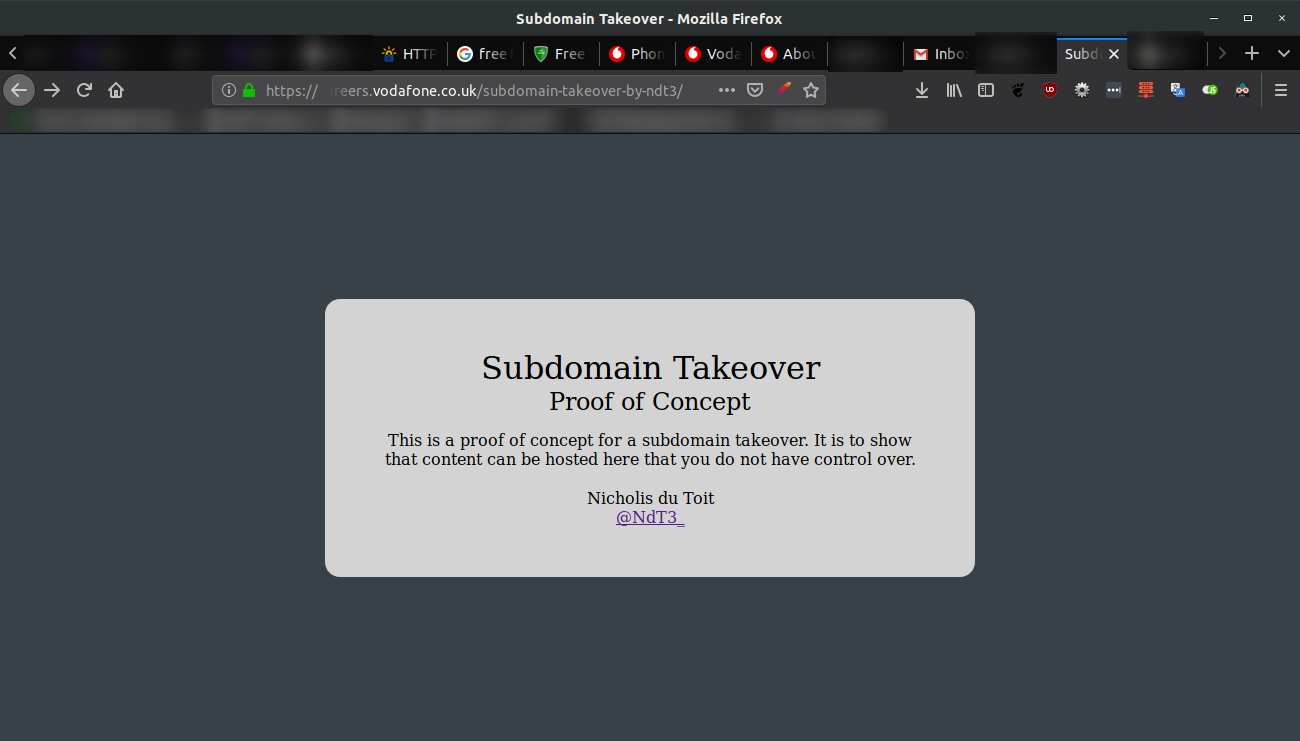 After a few hours and not even an acknowledgement of receipt, I contacted Vodafone UK on Twitter. 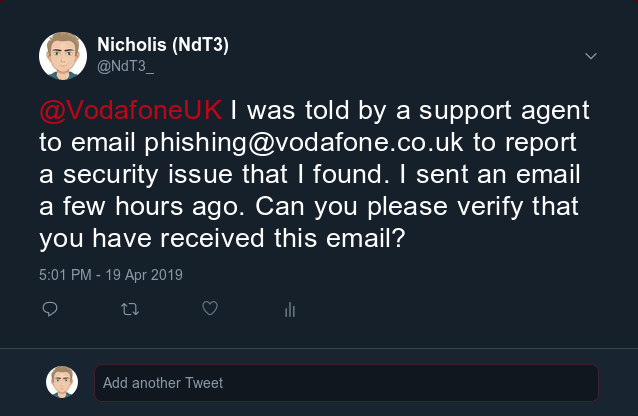 My tweet was ignored. So I went back to the live chat, hoping to get a response there. And they were not able to help. 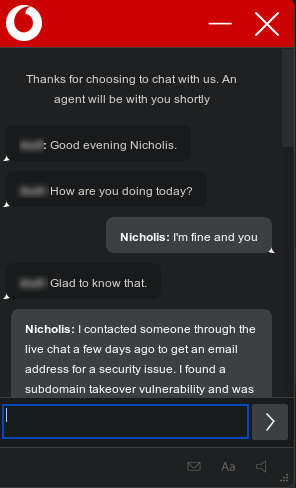 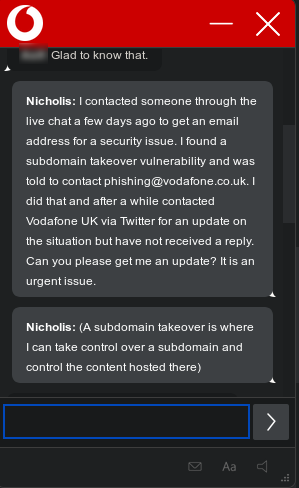 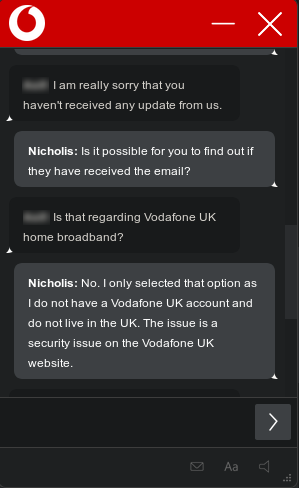 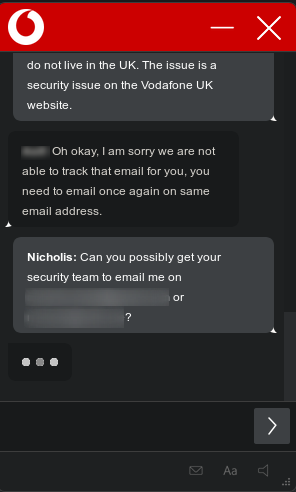 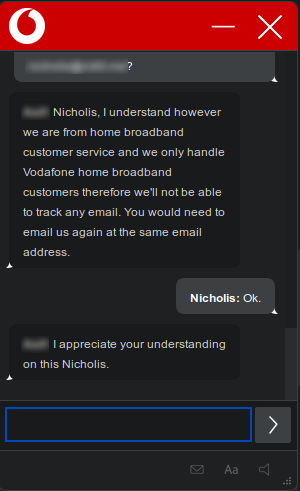 Back to emails then. I sent a reminder email.

Two days later I got a response but not a helpful one.

And a few days later, another reminder.

A few days after this, I got a reply back with more details from someone who appears to be in a more senior position.

And I replied verifying the fix and asking for permission to disclose.

I was hoping to immediately get a yes for the request. But more emails had to be sent.

And so I did send an email.

And another reminder email.

And eight days later, I received an email granting me permission to disclose after the 7th of June.

I did want to do a timeline but I edited some photos to blur out names and personal information and forgot to take note of the date or save a copy.

TL;DR: I found a subdomain takeover, reported it, and am now publicly disclosing it. You really should read the full post though.