Facebook, Instagram and WhatsApp were having issues yesterday (3 June 2019). While I can understand big companies having small issues as their infrastructure is massive and quite difficult to manage, the one thing that annoyed me the most is the lack of transparency into the downtime.

All times in this post are in SAST (South African Standard Time; GMT+2).

To more easily explain this, I will use the recent downtime of Cloudflare as an example. At 3:42 PM on 2 July 2019, they started experiencing issues which led to a global outage. Within 10 minutes, they posted a notice on their status page (https://www.cloudflarestatus.com/incidents/tx4pgxs6zxdr) saying that they were aware of the issue and are investigating. About 23 minutes later, they updated the status page again, this time saying that they have implemented a fix and are monitoring. 35 minutes later, another update on the status page with a brief description of the cause. 7 minutes after this, they marked this as resolved. Later that day, they posted on their blog with more details (https://blog.cloudflare.com/cloudflare-outage/). At 10:09 PM, they updated this post with more information. They identified the root cause of the issue as a bad software deploy where proper procedures for deploying were not followed properly leading to a global outage instead of a localised one. They provided more information into the exact cause and said that there was a “regular expression that caused CPU to spike to 100%”. They also provided information about their standard deploying procedure which should’ve prevented a global outage and as usual, said that they will make changes to prevent an issue like this happening again.

Cloudflare is one of the few companies that I use the services of that are not afraid to admit when they have messed up and provide transparency into downtime. This was a perfect example of this.

However not all companies provide this much transparency into downtime. Facebook (along with the Facebook owned Instagram and WhatsApp) had issues on 3 July. At this time, I am not aware of a public status page for Instagram which would allow users to check the status of their systems and allow Instagram to keep users updated if there are issues.

Around 2:00 PM, Instagram started having issues. While trying to use the app, only old images would load and no new posts or stories would load. I also tried to access an image from their CDN and got a “5xx server error” message instead of the image (which loads fine now, after the outage). 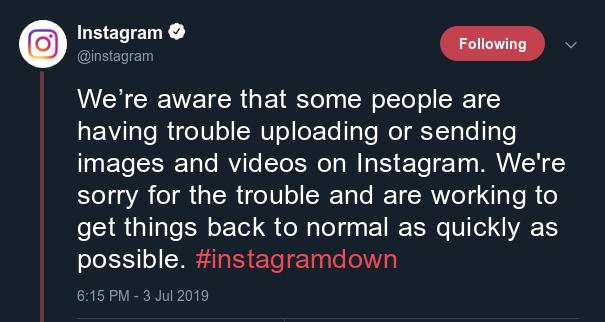 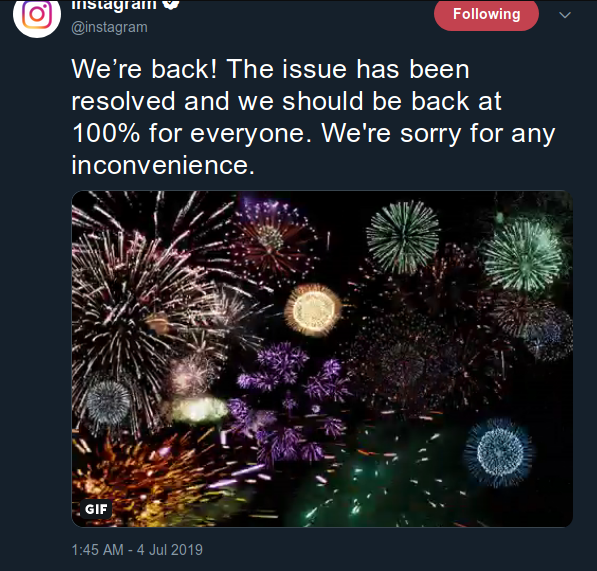 Well it’s nice to know that you are back online after almost 12 hours of downtime. But what happened?

After a bit of research, I found this article: https://edition.cnn.com/2019/07/03/tech/facebook-instagram-not-working-trnd/index.html.

A Facebook spokesperson said, “Earlier today, some people and businesses experienced trouble uploading or sending images, videos and other files on our apps”.

We already know of the issues, but what caused them?

“During one of our routine maintenance operations, we triggered an issue that is making it difficult for some people to upload or send photos and videos”

“We triggered an issue in a maintenance operation” is as much transparency as Facebook is willing to give into the downtime.

There is no way to guarantee 100% uptime (and I can understand that, some of my servers do go down sometimes), but if your systems do go down, keep users updated. If you messed up, don’t be afraid to say it and include more details about what went wrong and how you will prevent this. But after 12 hours downtime with almost no transparency, I would’ve expected at least a bit more detail such as what happened during the maintenance operation, what is the root cause of the issue, etc. If this was a service that I was paying for, and there was lack of transparency, I would immediately consider switching.

Facebook, I think you need to look at other companies such as Cloudflare who are very transparent with the root cause of downtimes.